Teaching Tori - One year on...

- July 16, 2015
A year ago, I secretly published my novel "Teaching Tori".
After clicking 'publish' on the Amazon interface, I didn't tell anyone for a week (apart from my husband and my daughter).
Would I do this again for my second novel? What have I learned over this past year? 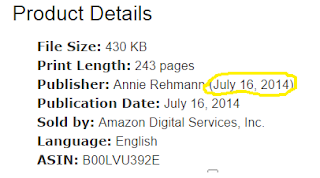 Writing came to me by accident. It isn't something I've always wanted to do, and it isn't something that I have to do, unlike other writers who feel like part of them is missing when they don't write.
So when I started writing, it was all very new and personal to me.
Only my closest family members and a couple of friends knew about this new hobby of mine. In hindsight, it seems a bit strange to be secretive about it, but at the time, I didn't have the confidence in my writing nor the desire to tell people about it.
So clicking 'publish' on that day a year ago wasn't only about finally achieving what I had worked so hard for, it was also about 'coming out' as a writer.

I had to go through it in stages to get comfortable about it:


Reality of course was different. I sold a few more books to other people who knew me from my online presence, but sales were slow and reviews dripped in even more slowly.
It took a while to sink in (or maybe I just didn't want to face the truth!) that every single blog post, every single bit of advice on promotion, every single word that I had read while slaving away writing my novel had been true, I just didn't want to listen because I focused so hard on my writing: Writing the book is the easy part. Promoting it is so much harder.
So I tried a free promotion which resulted in 650 downloads and one review. I read thousands of words on book promotion, but didn't actually do much about it. Where to start? What to do? How much to pay for advertising? Too many decision to make while also working full-time, drafting my second novel and going through the nightmare of building a house.
So I did what I thought was the best use of my time - write my next book (while still constantly
thinking about what else I could do, and driving myself mad in the process!)

What have I learned since clicking that 'publish' button a year ago?
It is easy to say now that I should have organised a proper book launch and promoted myself and my book prior to publishing it. Reality is, I wasn't ready or comfortable with that idea. This year has been a huge learning curve and I have grown so much in confidence in my own writing that I am now quite happy being out there in the big wide world for everyone to see.
That doesn't mean that I'm not thinking very carefully about my next book. I have learned from the frustration and lack of promotion of "Teaching Tori" and will do things differently for my sequel "Teaching Tom".

But that's the topic of a whole new post. Time to sit down and have a celebratory cup of coffee (it is too early in the day for anything else).

Happy Birthday Teaching Tori! Maybe you grow into a beautiful established book with thousands of happy readers (and a little brother coming soon....)